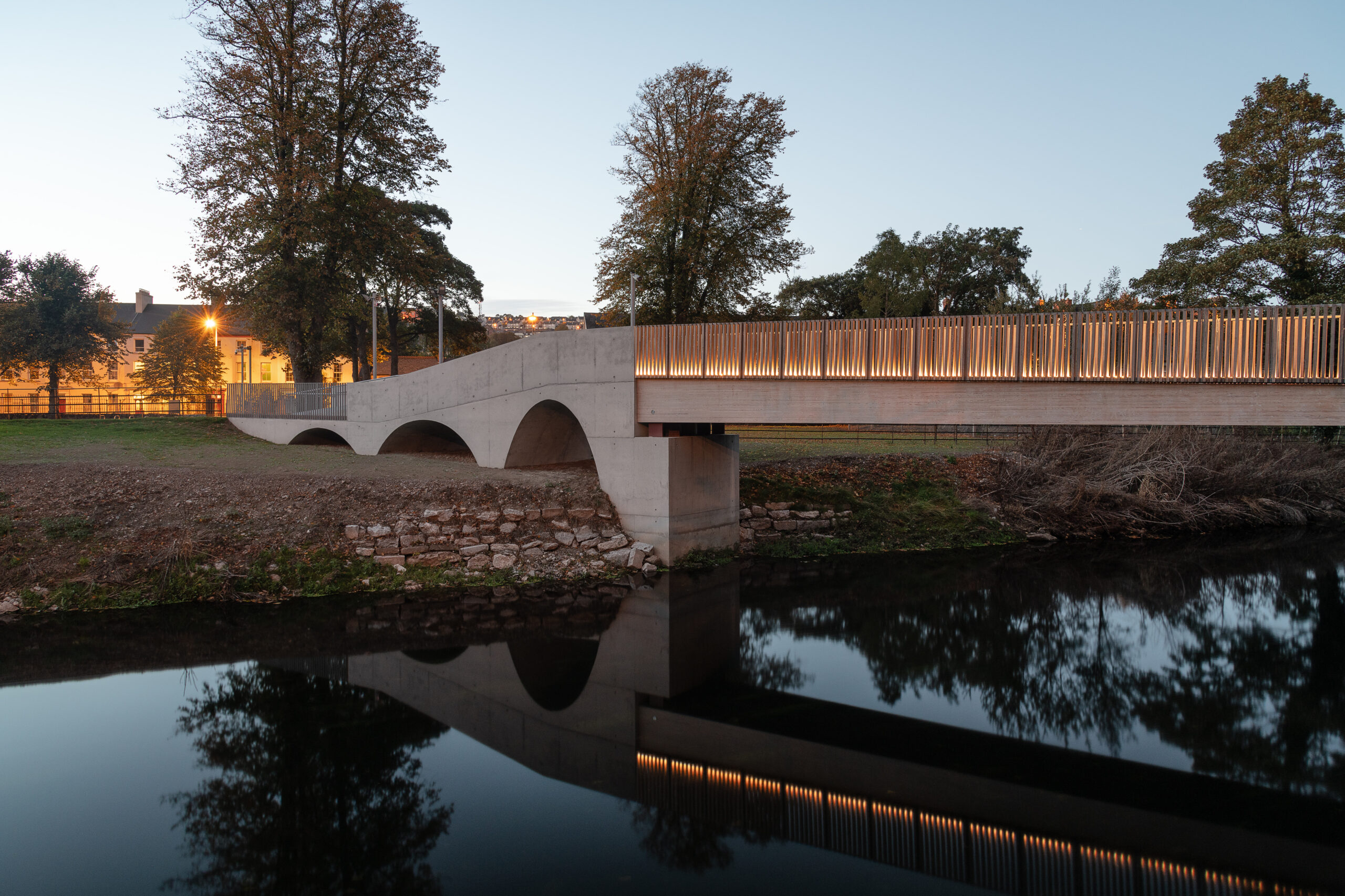 Excellence in concrete design and construction was celebrated at this year’s Irish Concrete Society’s Awards Evening, which took place on the 30th of March in the Clayton Hotel, Burlington Road, Dublin.

This was the 37th Annual Awards Evening and the event is always one of the highlights of the construction industry’s calendar, with 280 attending. The Awards recognise excellence in both design and construction in concrete and are adjudicated by a distinguished, independent jury of industry professionals. The main awards jury reviewed a total of twenty-five projects nominated in three categories of main awards – Element, Infrastructure and Building. There were also nine projects nominated for the 7th International Award, which is sponsored by Enterprise Ireland. In addition, the winner of the annual Séan de Courcy Student Award was announced.

“Since its inauguration in 1977 our awards evening has become a highlight of the construction industry calendar and the awards themselves are widely recognized for the exceptional quality standards and levels of excellence they represent, in concrete design and execution.

This year, we received an exceptional standard of nominations across all of the various categories and I commend all the entrants for the skill, ingenuity and resourcefulness on display in the array of outstanding projects that are showcased in the competition.” 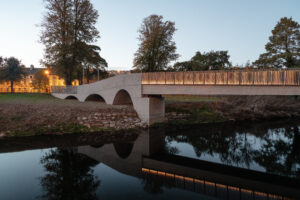 Chosen from a total of 9 element category entries and 25 entries for overall award.

“Great care and consideration has been given to the crafting of the abutments of this bridge, a delightful addition to the banks of the Lee, facilitating pedestrian connectivity across the river within the UCC campus”.

“The plasticity of concrete has been used to great advantage to sculpt elegant forms in the differing conditions at each side of the bridge, on one side seamlessly offering universal access in a 20m long ramped form, simultaneously offering a place to sit, whilst on the other integrating playful parabolic arches sitting in the floodplain below.” 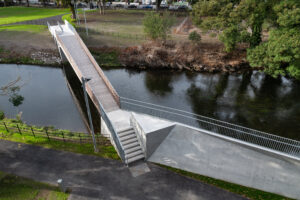 “The inherent materiality of concrete is explored and made manifest in a variety of excellently executed finishes, their respective locations carefully considered with regard to how users will interface with the concrete (ground and slip resistant underfoot, polished where the human hand will pass over it).” 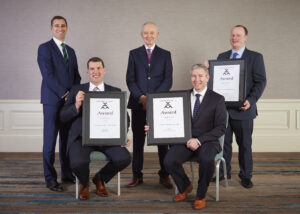 Chosen from a total of 5 projects entered. 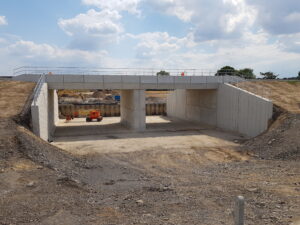 “The designers and contractors of the winning project in this category were presented with a challenging logistical problem – how to construct a new road bridge under an existing busy rail line which could only be closed for a short period.

The judges were impressed with the near unique solution of bespoke large scale interlocking precast concrete U sections which were installed quickly in the challenging timeframe, and resulted in a robust, durable structure with excellent finishes.

The feasibility of erecting the precast concrete structure was tested by constructing a scale timber model which was used to perfect the erection sequence.” 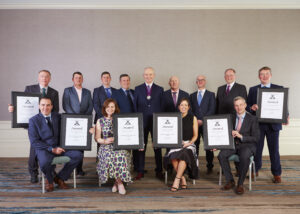 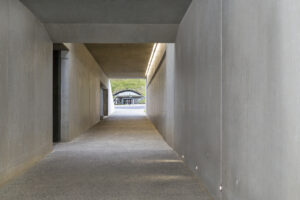 Chosen from a total of 11 entries

“In the sensitive landscape along the coast of Clare to which visitors flock to view the Cliffs of Moher, this project seeks to minimise its visual impact on the setting, creating a sunken enclosure of concrete, incorporating reception facilities for the various coach companies serving the site.

Concrete is cleverly used to hold back the earth enabling the necessary accommodation to be concealed in a mounded form. Benefiting from the inherent strength, robustness and resilience of concrete, its comprehensive use seems particularly appropriate here. Carefully detailed fair-faced concrete is used extensively in the floors, walls and ceilings both internally and externally, treated with various finishes from exposed aggregate to highly polished, according to its location. Artificial lighting is hidden in niches carved out of the concrete, whilst canted sky windows are crafted to allow daylight into the concealed interior.” 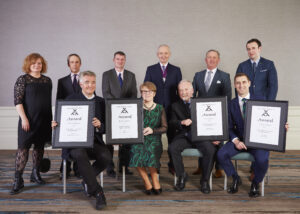 An award, sponsored by Enterprise Ireland, that recognises Irish companies who export product or service off the island of Ireland.  The Award reflects the continued emphasis on export for Irish construction. The Jury included David Clarke of Moloney O’Beirne Architects,  Ed Hanlon, Engineer and Donal Byrne from Enterprise Ireland.

Chosen from a total of 9 entries. 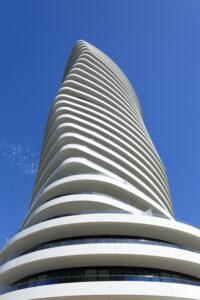 “This curved landmark building is situated on a prominent location overlooking the Thames in Battersea. Designed by Patel Taylor and constructed by Barratt Homes, the building appears to twist as it rises through 28 storeys.

The precast concrete balconies wrap around three sides of the building, creating a carved stone effect and contributing hugely to the aesthetic quality of the project.

The structural precast concrete balconies, which were dropped into position as the building went up, required continuous collaboration between the architect, builder and precast concrete manufacturer to achieve the desired effect.” 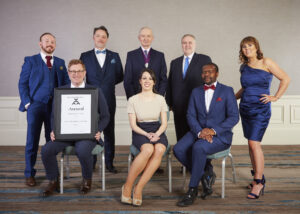 This is an annual award given to the best final year project on a concrete related topic from the engineering faculties of 3rd level colleges.

The award is named after the late Professor Séan deCourcy, an inspirational professor for many years at UCD, a former chairman of the Irish Concrete Society, an author and historian of note. 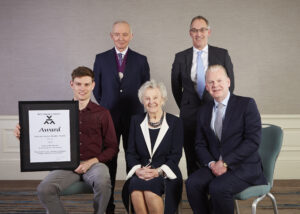 About the Irish Concrete Society

The Irish Concrete Society is a learned society founded in 1973 to support and encourage technical excellence in concrete.  It is a cross-sectorial, independent, impartial, science based organisation. With membership open to all who have an interest in concrete.

The Society acts as a focal point for industry debate, research, education, standards development in the field of concrete technology, design and construction. The Society is a not for profit organisation funded by membership subscriptions and the services it offers.