The most commonly used terms to describe the properties of concrete are:

This relates to the ease of transportation, placing, compaction and finishing of fresh concrete. It can be affected by many factors, including water content, temperature, aggregate properties, cement content, mixing time, elapsed time after mixing.

The workability of fresh concrete is increasingly referred to in European standards as consistence. Consistence can be described as a combination of workability and cohesion.

Cohesion is the resistance of the mix to the segregation of its contents and to bleeding- the release of water from the mix.

Concrete is strong in compression but weak in tension. Steel is often used as reinforcement, as it is strong in tension. When we talk of concrete strength, we generally mean compressive strength. The units used to measure compressive strength are Newtons per square millimetre, or N/mm2. Strengths are ever increasing due a corresponding increase in demands from the material, followed closely by new technologies. Typical strengths range from as low as 20N/mm2 for small jobs to as high as 65N/mm2 for structural concrete.

The strength of concrete increases as the cement content increases for a fixed amount of water. In general, the lower the water / cement ratio, the higher the strength.

The compressive strength of concrete is measured by testing cubes or cylinders in a laboratory. In Ireland, the standard practice is to use 150mm or 100mm cubes rather than cylinders, which are more common in some European countries.

Concrete strength increases with time where moisture is available. However, it is accepted that around 80% of the strength is reached at an age of 28 days and so this is the length of time a concrete cube is stored, in controlled conditions before testing.

Read Dr. Roger West’s Paper from the Irish Concrete Society Back to Basics seminar on testing of concrete properties in Trinity College Dublin.

Back to basics seminar 2002

Concrete can be affected in the hardened state by factors such as weathering, chemical attack, abrasion and freeze/thaw attack. It is important that the thickness of concrete covering steel reinforcement (or ‘cover’) is sufficient to prevent the ingress of moisture and air, which may lead to corrosion. 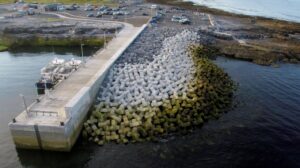 When designing concrete structures to resist aggressive environments, a strong, dense concrete with low permeability is necessary. For a structure to resist deterioration, the right blend of design, materials and quality of construction is needed.